BEST WESTERN PLUS Hotel Stellar is a recent addition to the Boutique Hotels of the World.

Following a multi-million dollar transformation in one of Sydney's premier locations, adjacent to Hyde Park and the Oxford Street gateway, in the city's centre.

BEST WESTERN PLUS Hotel Stellar's history begins with the construction of a 4 level business premises designed by Robertson &  Marks Architects and approved by Sydney Council in 1917.

The building was named Roylt House following the construction of the extra 3 floors.

Predominately used by the garment industry until the late 1960's.

The premises was purchased at auction by the current owners from the Sydney Council in 1972 and partly renovated to suit their  Sapphire mining and polishing business, Stellar Mining.

In 1980 the owners proposed the effective re-use of the premises to be remodeled to an inner city residential apartment development.

It was only the second such application to Sydney Council at the time and was approved in 1985 prompting the commencement  of Sydney city's future residential direction.

The detail Architectural work was undertaken by Ercole Palazetti under the supervision of Joshua Farkash, both now well regarded Architects in their own rights.

Following the building refurbishment, the property received many building and architectural awards.

The owners kept the property and commenced Stellar House, an executive serviced apartment operation. Following 20+ successful years, the property was repainted in the historic 1925 Heritage colour and remodeled in 2013 to it's present 4 Star  levels of accommodation and fit out. 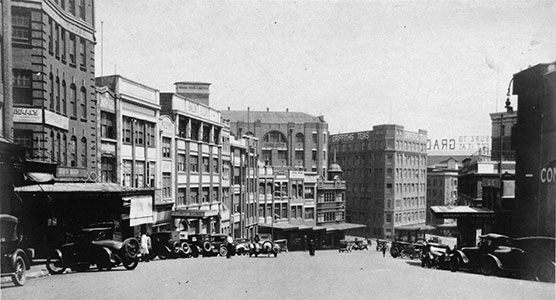